About Us
|
Facilities
|
Our Team
|
Testimonials
|
News and Events
|
Contact Us

Crates Funeral & Cremation Services has been serving Findlay, Arlington, North Baltimore & Kenton area families for years. We are honored to be a part of the rich history of this community and plan to be a part of it for many years to come. 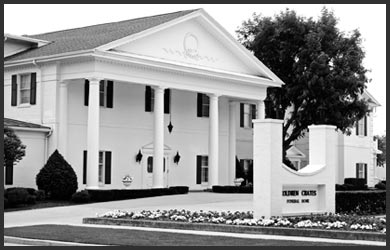 You are welcome to call us at any time of the day, any day of the week, for immediate assistance. Or, visit our funeral home in person at your convenience. We also provide a wealth of information here on our website.

Our firm traces its origin to a young Hancock County farm boy, Willis G."Billy" Coldren (1880-1947) who was born and raised on the limestone ridge near Vanlue. Billy had an extraordinarily kind and helpful personality that seemed to attract people to him. He was sought out by John McGuire, an undertaker in Carey, Ohio who felt that he had the qualities that would be helpful with his practice. Mr. McGuire set in motion a career that would ultimately lead Billy to be acclaimed as one of the leading funeral service practitioners in Northwest Ohio. Mr. Coldren began with Mr. McGuire in 1905 and was recruited by Walter S. Clark to manage his firm in Findlay and make the move to Findlay in 1913 manage the Clark firm until Mr. Clark’s death in 1925.

With some 20 years of experience in funeral service, he was encouraged and supported by many to start his own practice. He rented a store front on West Main Cross St. and with a partner started the Coldren and Coleman Funeral Home in 1925. Most wakes and funerals were held in private homes and churches so a store front location was adequate for short while. His business thrived and prospered and he moved to the old Presbyterian manse at 203 E. Sandusky St. (now Marathon Oil parking lot). He was joined by his son, Rex C. Coldren, as their business continued to expand to where there business volume exceeded the combined volume or the other practitioners in Findlay. In 1937, they moved to 205 West Sandusky St. where from a single home, the business occupies a half city block at the present time. Three generations of the Coldren family have managed the firm with David R. Coldren, Rex’s son, also joining the practice.

Three brothers, Larry, Charles and Jack Crates, who were also farm boys from southern Hancock County began a business in funeral service in Arlington in 1968 and acquired the Goff Funeral Home in Carey, Ohio in 1970. The aging Coldren’s merged their business with the Crates’ in 1975 and that merger proved to be a good fit since the similarities between the families were very great and the strength and weaknesses of the various family members seemed to compliment each other beautifully. It was determined that the central location of the facility was an asset so the building has been remolded numerous times, but a major rebuild took place in 1979-80 bringing the facility to a level that exceeds anything in the area.

The business founded after WWII by Frank Paden in North Baltimore joined in the merger in 1986. This marriage of businesses also has proven to be a sound one as the backgrounds and origins of the people of our communities are similar. The economy of scale allows us to provide a much higher level of service than would be possible if we were not yoked together.

A new perspective and depth has been added with the return of the next generation of our family. Amanda, Scott and Andrew Crates are fully licensed funeral service professionals with rather eclectic academic backgrounds that seem to generate new ideas and better ways to deliver service to a new generation. Our facilities and services are constantly evolving and reconfigured to serve an ever changing population.

If you need our services immediately, please call us.
We will begin the process of bringing your loved one into our care right away.